The History of Rhinoplasty: Part I 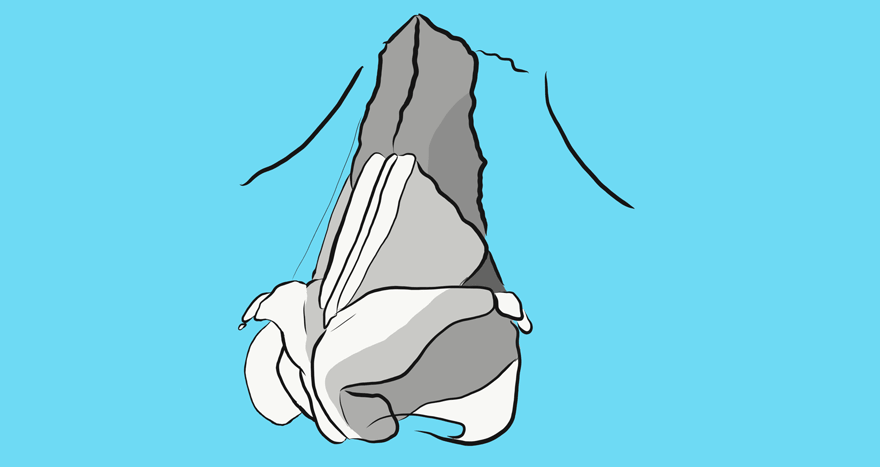 The story of the rhinoplasty – from ancient times to today – is about constant improvement.

The nose serves many functions.  It sniffs and sneezes, warms and wets the air as you breathe.  And ideally it’s an attractive feature, as it rests right in the middle of our faces.  For nearly as long as we’ve had these noses we have searched for ways to fix them when it goes awry.  In ancient Egypt, physicians would reset a broken nasal bone with a stiff cloth back to the middle and dress it in honey.  In ancient India, when a thief had his nose removed as punishment a surgeon could slice and slide over the nearby cheek skin to rebuild it.  And today we facial plastic surgeons are using cadaveric irradiated rib cartilage, donated acellular dermis, synthetic porous polyethylene and other science-fiction-y materials to reshape, reinforce, and resurface our patients’ noses.

But there are sputters and stops along the way.  Selfish interests, big egos, strokes of genius, practiced mediocrity - are all in the story.  But the long view shows us that we stood on each other’s shoulders to get better and better results.  In this way, the story of the rhinoplasty acts as a stand-in for the ascent of medicine and surgery as a whole. It’s messy and bumpy, but the good wins out.

Rhinoplasty: What and Why?

Rhinoplasty is the most studied, most argued, and most complicated surgery facial plastic surgeons perform today.  Surgeons cancel their clinics to attend conferences throughout the year just to dissect just the topic.   Dozens of textbooks are filled with diagrams of surgical pearls. There are few ideal rhinoplasty techniques surgeons universally agree upon. Oftentimes there are few ideal rhinoplasty results that surgeons even agree upon.  It's complicated business.

The term “rhinoplasty” itself may refer to any number of small nips, medium tucks, or even complete overhauls of the nose.

Rhinoplasty comes from the Greek “rhis”, meaning nose, and “plassein”, meaning to shape. For many, the term conjures up images of Jennifer Grey, Ashlee Simpson, and Michael Jackson - and that’s not wrong.  But the cosmetic aspect of the ancient surgery is only part of it.  Thousands of patients each year undergo rhinoplasty, not for cosmetic reasons, but because they can’t breathe through their noses.  Or they snore.  Or they broke their nose snowboarding.  Or in a bar fight.  Thousands more undergo reconstruction of their noses because they had a skin cancer removed. All of these vastly different surgeries fall under  the umbrella term “rhinoplasty” – “to shape the nose”.

What makes it so complicated? Three things: the anatomy of the nose, its placement right in the middle of the face, and it’s function – to get air in and out.

If you look straight on in the mirror you’ll find the top third of the nose, closest to the eyes, is comprised of the nasal bones.  The middle third is made up of the paired upper lateral cartilages.  And the lower third, the tip of the nose, is formed by the paired lower lateral cartilages.  If any of these structures are too big or too small, too left or too right, too up or too down, the breathing and the look of the nose may be affected. And we can’t forget the septum; the cartilage and bony rectangle that divides the two nasal cavities and props up the nose from below like a tentpole.  If this swings to the left or right then we’re stuck rebuilding the nose on an uneven foundation.

And you may have noticed the nose is placed right between the eyes, above the mouth, sticking straight out in the middle of the face.  We may not know we’re doing it, but every time we greet a new face - on the subway or at the DMV - we’re analyzing the spatial relationship of the nose with the facial structures around it.  When we come across a face in which the relationships seem to blend well we’d find it appealing and be drawn in.  Ironically, the most attractive noses may be the most invisible.  When we encounter someone with an inoffensive-looking nose our eyes seem to skip right past it and focus on the eyes of the face we’re analyzing - watching them express and direct conversation. However if the nose seems to be out of balance our eyes will settle right on the nose and take notes.

Figuring out what the “ideal”, most harmonious, relationships may be has been studied for centuries, from before Leonardo da Vinci to today.

Pinning things down to a universal “beauty” constant is obviously impossible but we’ve recognized a few consistent findings over the years. We respond pleasantly when there are gentle visual arcs from the eyebrows to the tips of the nose.  And a gentle slope from the bottom of the nose to the lips below.  It looks good when the base of the nose fits in a line drawn down from the inner corners of the eyes. Most importantly we respond to symmetry.

Lastly, when performing each surgical maneuver we recognize the nose has to work as well as it looks. I may give a patient the nose of Helen of Troy but if air doesn’t pass back and forth then I’ve failed.  The nose and all the structures inside it are essential to observing and interacting with our surroundings.  It needs to warm and humidify the air as we breath. It needs to smell things (is something burning?!).  And it needs to stay open and clear so that the plumbing of our sinuses and ears, which drain into the nose, don’t get backed up.  It’s a complicated structure built by a very long evolutionary process.

The placement, anatomy and function of the nose make it a complicated organ, and we surgeons love performing rhinoplasty because it’s complicated. It requires a mastery of dozens of subtle, difficult maneuvers – and the surgeon must change and improve their technique with each surgery. This goal of improvement is essential. The surgery today is much, much different than it was 100 years ago (read ahead to learn why this is a good thing). This arc of progress over time was built one brick at a time. Each breakthrough along the way was a discovery for a particular patient with a particular problem. And each problem was a reflection of its time. The challenges that surgeons (and their patients) faced were different for every point in history - religious backlash, ego, stigmatization, lack of knowledge or resources, among others. Solving those challenges over the last five or six millennia landed us here. And predict which challenges we’ll face in the future.

How does this circle back to rhinoplasty?

You may wonder, as I do, why it is that we all ask our noses to perform the same functions but they all look so different.  Part of the answer is likely from interbreeding with other hominid species, now extinct.  When our ancestors would migrate to a new region they often meet new neighbors already living there. The groups, and their noses, mixed.  For example, people of European descent have longer noses and faces with deeper ridges above their eyebrows than others.  These noses and faces are similar to the locals already in Europe when Homo sapiens showed up.  Another, non-nose example - East Asians and Native Americans have “shovel shaped incisors” similar to archaic human fossils found in those regions that date to well before our ancestors arrived.

“Shovel-shaped incisors” and long noses are all great features - in the right environment.  You might say these adaptations were naturally selected for that specific environment.  For example, noses are responsible for warming and humidifying air when we take a breath.  Since the 19th century we’ve known that narrow and longer noses were selected for colder, dryer climates and broader and wider noses for warmer, more humid climates.  My Irish-German nose is better for European winters while a broader, shorter nose is better in the jungle.  It’s the same for the differences in our skin color, too.  Our skin needs sunlight to make vitamin D, but too much of the UV radiation in that sunlight can cause cancer and a host of other problems (e.g. premature aging).  To protect us from the sun, our skin produces melanin, which is responsible for the pigment in our skin.  But the more melanin we produce the less vitamin D we make.  So, via natural selection, our ancestors living in sunnier climates have greater melanin production and darker skin tones. Those of us with lighter skin had ancestors that see didn’t see much sun, didn’t need much melanin but needed to maximize vitamin D production.

So, nature picked the winners and losers over tens of thousands of years.  Fast-forward to today, and –congratulations – you’re among the winners.  Natural selection has gifted us with the latest and greatest nasal iOS. However, our noses are designed to work best in the laboratory in which they were shaped. Today, for example, my nose has left the Irish caves of my ancestors and is ill-equipped for a humid subway in summer.

Beyond how well our noses work today, the noses that we prefer to look at have also changed.

Which noses and faces do we as a collective deem “beautiful”? The answer changes from era to the next, sometimes one year to the next.   Also, the nasal features that we define as emblematic of leadership, intelligence, and dishonesty can also change quickly.  And as we all know, the tolerance of each others’ differences grow and shrink.

So looking back to the (really) early years of our noses and you find that the form fits the function.  The nose that nature selected for our ancestors hopefully served them well because very few cavemen were performing rhinoplasties.  During the next phase of history we begin to alter our bodies, and noses, to live longer and live better.   We begin to study ourselves by way of anatomy, physiology, medicine and surgery. However, our species’ advancements throughout history come in small packets of genius rather than a steady stream.  The real leaps occur by those civilizations that provide themselves with the safety and free time that is necessary for discovery.

We’ll start with the Ancient Egyptians.